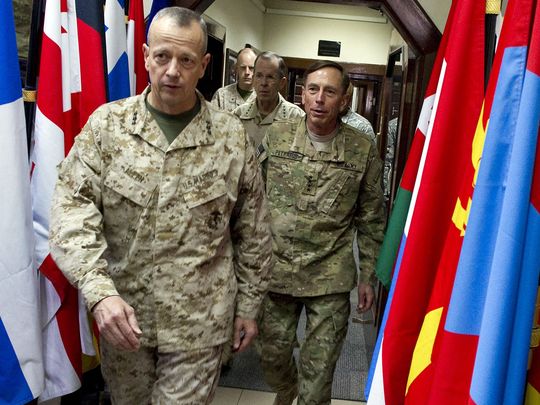 Professor Bill Schneider in the news!

Marine Corps Times – Marine Gen. John Allen has endorsed Hillary Clinton for president. Here’s why that matters…Retired Marine Gen. John Allen says presumptive Democratic nominee Hillary Clinton is the right person to be the next commander in chief.Allen, who led  troops in Iraq and Afghanistan and served as the U.S. envoy to coordinate the international fight against the Islamic State group, said on Monday that Clinton has the patience and understanding to make smart decisions about using military power“This has been a very personal decision for me,” Allen said in Clinton campaign news release. “I have stayed out of the political arena my entire adult life, but given the complexities of issues facing our country today and its longtime allies, I felt compelled to speak up and be heard.”I have no doubt that she is the leader we need at this time to keep our country safe, and I trust her with that most sacred responsibility of Commander-in-Chief.”Allen could not be reached for comment. Clinton thanked the retired general for his endorsement during her speech Monday at the Veterans of Foreign Wars convention in Charlotte, North Carolina.”His confidence in me — and that of the other esteemed military leaders who support my campaign — means a great deal to me,” Clinton said. “But it also imposes a high responsibility on me as well.”Bill Schneider, an expert on political campaigns, said that Allen’s move could reassure some voters who are still on the fence about whether Clinton can be trusted as commander in chief.MILITARYTIMESDemocrats line up their national security stars for convention week“That’s very important because she would be the first female commander in chief in history,” said Schneider, who is currently a visiting professor of communications at the University of California, Los Angeles. “It’s an important statement because it shows that military people can work with her.”