Brick by brick, a UCLA alumnus is building his way to the top on Fox’s “LEGO Masters,” a Lego-building reality competition show.

Bryan Firks, who graduated in 2018, first became interested in Lego building as a child when his father brought home a small Lego set. He began building designs when he was 4, and now with the show, he hopes to reconcile his passions for storytelling and Lego building.

On “LEGO Masters,” pairs of Lego builders build Lego designs to complete a challenge in each episode. A winning team is crowned at the end of the season.

Growing up in Aliso Viejo, California, Firks visited the Legoland theme park in Carlsbad, California, frequently. He said he was inspired by the intricate Lego designs there and would try to emulate them with his own Lego bricks at home. He enjoys building as a creative outlet, he added.

Firks continued to develop his artistic skills while at UCLA, where he studied communication and film. Taking film classes helped him hone his storytelling skills as they emphasized writing compelling characters with clear action, he added.

“My whole time at UCLA was spent thinking about movies and making movies,” he said.

He also participated in several film clubs and made short films while at the university. His short film titled “Ovation” won an award after being presented in a campus movie festival and was later shown on Virgin America flights.

Firks’ experience with film at UCLA inspired him to incorporate storytelling into his Lego building. He wanted to partake in the “LEGO Masters” competition to share his passion with more people, he said. 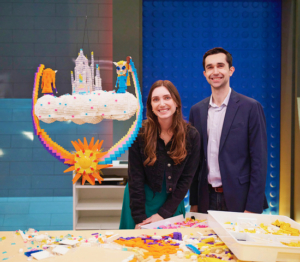