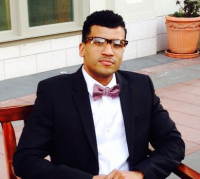 Vice President, Distribution at A+E Networks (A&E, History, and Lifetime networks).
In his current role, Walton is one of A+E Network’s distribution team leaders, overseeing business strategy and relationships with U.S. and Caribbean based distributors. In addition, he is responsible for distribution strategies across an array of platforms, which includes VOD, digital, and authenticated content rights.

Walton has been with A+E for over 14 years, starting his career as an Assistant in Affiliate Sales and then advancing to Account Representative followed by Account Manager and Account Director. In these roles, he managed sales and marketing, demographic research, and contributed to the launch strategy for History en Español securing the network’s first carriage deal.

I wanted to have career working in the forefront of media and communication focusing on content creation and distribution.

Attending "The Superhighway Summit" in 1994 where Vice President Al Gore and Prof Jeffery Cole introduced the internet to the world.

The Comm Studies professors and team provided me with a strong knowledge base along with the highest level of support that has provided me with the self-awareness and confidence to sustain a meaningful and successful career.

Take a multi-decisional approach to your learning. Don't just seek to thrive in the classroom and get the highest GPA. Get yourself out there, do internships, and network. Find opportunities to practice what you're learning in the classroom in real-time. Take time to identify and learn about your core values so you can align them with your career aspirations.This will all help to pave path to success for you after you graduate.

I enjoy international travel as it's one thing to experience "globalization" vicariously via the internet and media platforms, and another to have the first-hand experiences and connections with people.
I also run a website (Scare-Zone.com) that's focused on haunted attractions and scary movies. Yes, it is a little strange; but it's really a fun and creative outlet that allows me and my team to personally experiment with different online and social media platforms. It's also popular with the genre's fans and celebrities such as Wes Craven, Elvira, and Neil Patrick Harris.

• Inducted into Beta Gamma Sigma; the international honor society for business schools that recognizes outstanding academic achievement
•Named one of CableFAX’s Most Influential Minorities in Cable in 2010 and 2013
•Honored in 2012 as a NAMIC (National Association of Multi-Ethnicity in Communications) Luminary, which recognizes the cable industry’s next generation leaders
•Recipient of the 2012 WICT (Women in Cable and Television) Advocate Leader Award
•Recipient of the 2007 A&E President’s Award for Creativity and Innovation in Business