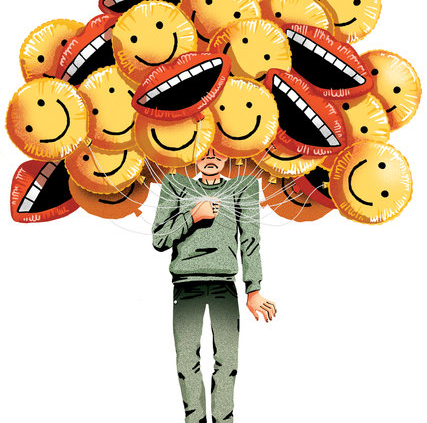 Eavesdrop on any conversation or pay close attention to your own and you’ll hear laughter. From explosive bursts to muffled snorts, some form of laughter punctuates almost all verbal communication. Electronic communication, too, LOL.You’ll probably also notice that, more often than not, the laughter is in response to something that wasn’t very funny — or wasn’t funny at all. Observational studiessuggest this is the case 80 percent to 90 percent of the time. Take Hillary Clinton’s strategic laughter during heated exchanges with Donald J. Trump during the presidential debates. Or Jimmy Fallon’s exaggerated laughter when interviewing guests on “The Tonight Show.” Or employees at Fox News reporting that they tried to “laugh off”unwanted sexual advances by Roger Ailes and others within the organization.How laughter went from a primal signal of safety (the opposite of a menacing growl) to an odd assortment of vocalizations that smooth as much as confuse social interactions is poorly understood. But researchers who study laughter say reflecting on when and why you titter, snicker or guffaw is a worthy exercise, given that laughter can harm as much as help you.“It’s a hall of mirrors of inferences and intentions every time you encounter laughter,” said Sophie Scott, a neuroscientist at University College London who studies how the brain produces and processes laughter. “You think it’s so simple. It’s just jokes and ha-ha but laughter is really sophisticated and complicated.”Laughter at its purest and most spontaneous is affiliative and bonding. To our forebears it meant, “We’re not going to kill each other! What a relief!” But as we’ve developed as humans so has our repertoire of laughter, unleashed to achieve ends quite apart from its original function of telling friend from foe. Some of it is social lubrication — the warm chuckles we give one another to be amiable and polite. Darker manifestations include dismissive laughter, which makes light of something someone said sincerely, and derisive laughter, which shames.The thing is, we still have the instinct to laugh when we hear laughter, no matter the circumstances or intent. Witness the contagion of mirthless, forced laughter at cocktail parties. Or the uncomfortable laughter that follows a mean-spirited or off-color joke. Sexual harassers can elicit nervous laughter from victims, which can later be used against them.“What happens is, somebody makes an inappropriate comment, and the reaction of the person, often laughter, is what the defense uses to allege the conduct wasn’t unwelcome,” said Gina DeVito, a lawyer in Sausalito, Calif., who represents victims of sexual harassment. “I hear the same thing when I do sexual harassment training because lots of men say, ‘Hey, she was laughing.’ ”In fact, we have probably all laughed on occasions when someone said something weird, vaguely insulting or just confusing. It’s an almost reflexive ruse so you can move through the awkward moment and perhaps allow the other person to save face. Probably the most extreme example of this occurred during the infamous Milgram experiment, in which volunteers became so flustered when ordered to administer electric shocks to someone that they started laughing hysterically.“Laughter is often a defense that conceals a painful or unwanted feeling,” said Jane Yates, a psychoanalyst who teaches at the Emory University Psychoanalytic Institute. “But it can backfire,” not only because of the cognitive dissonance from laughing when you don’t mean it, she said, but also because it encourages the bad or clueless behavior that preceded it.Researchers at the University of California, Los Angeles, found that people mistake fake for genuine laughter a third of the time, which is probably a low estimate as the fake laughter that subjects heard in the experiment was not produced in natural social situations. While laughing on command is rarely convincing (think of sitcom laugh tracks), “your average person is pretty good at fake laughing in certain circumstances,” said the study’s lead author, Greg Bryant, a cognitive psychologist who studies laughter vocalization and interpretation. “It’s like when people say, ‘I’m not a good liar,’ but everyone is a good liar if they have to be.”Click here to read the entire article.