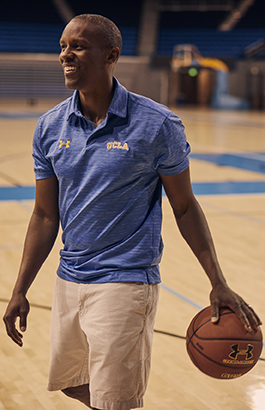 It’s hard to believe that 23 years have passed since Tyus Edney saved UCLA basketball’s last NCAA title run. Everyone remembers that second-round game in Boise — it was the West Regional of the 1995 NCAA Tournament, and Missouri was leading UCLA, 74 – 73, with 4.8 seconds remaining.But UCLA Coach Jim Harrick had a plan: Cameron Dollar was to pass the ball inbounds to Edney, who would dribble the length of the floor and take it to the rim. Harrick was sure that with Edney’s speed, the guard could easily cover the length of the court in 4.8 seconds, and no one would try to foul him. As everyone knows, the plan worked. Edney made the shot, and UCLA would go on to beat Mississippi State, Connecticut, Oklahoma State and Arkansas to win the NCAA championship. And to this day, Edney is known as a hero to Bruin basketball fans and a source of heartbreak to Mizzou fans.Edney is humble and just a tad embarrassed when he is asked about that game (which is very, very often). “I do get asked,” he says. “Even when I’m out recruiting and just seeing people around, they remember that. It’s a lot of fun for me. You never know when something like that is going to live on. It’s always nice to hear those things and talk to people about it.”A four-year letter winner at UCLA, Edney served as a starter on the 1992–93, 1993–94 and 1994–95 teams. The former point guard is still ranked on numerous top-10 career record lists at UCLA, including second in assists (652, 5.2 assists per game), third in steals (224, 1.8 steals per game) and third in free throws made (450).Click here to read the full article.