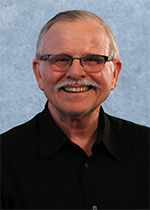 Charles Goodwin, UCLA distinguished research professor of communication and key member of UCLA’s Center for Language, Interaction and Culture, died March 31, 2018 from cancer. He was 74.

Goodwin, who joined UCLA in the former department of applied linguistics in 1996 and taught until his retirement in 2017, is remembered by colleagues on campus as a creative and compassionate educator, a talented and prolific researcher and a pioneer in the field of social interaction research.

From his 1977 dissertation at the University of Pennsylvania, Goodwin cemented his place in the field, said Tanya Stivers, professor of sociology at UCLA.

“He not only contributed ground -breaking research but also opened up dozens of pathways for future work including on eye gaze, storytelling, turn-taking and action,” Stivers said.

In a review of Goodwin’s final book, “Co-Operative Action,” fellow linguistic anthropologist Nick Enfield, a professor at the University of Sydney in Australia, characterized him as “one of the most creative, insightful, and unfettered scholars of human social action in interaction.”

Goodwin’s life work was to further these lines of inquiry and more through his own work, his work with wife and intellectual partner Marjorie Harness Goodwin, who is a distinguished research professor of anthropology at UCLA, and with his students.

“Start to finish, Chuck’s absolutely irrepressible energy, joy, inquisitiveness and passion for learning transformed our field,” Stivers said. “He will be deeply missed. He has touched the intellectual lives of many hundreds of scholars, solidifying his incredible legacy.”

A dedicated and curious mentor, Goodwin founded and held a weekly “Cooperation Action Lab,” open to grad students, faculty and visiting scholars. In the last few weeks of his life, when he couldn’t make it to campus, he held the lab in his home.

“We, faculty and students alike had the opportunities to share and discuss our ongoing research and present original work-in-progress,” said Federica Raia, assistant professor in residence in the UCLA Graduate School of Education & Information Studies.

“In that space, big ideas, research questions, as well as genuine laughter, always emerged creating a special sense of wonder and joy capturing us all,” Raia said. “He was one of the most intellectually and personally generous persons I ever encountered in my life, always ready to share, help and support the other, students, senior and junior faculty alike.”

Goodwin began his professional life as a caseworker in Harlem for the New York City Department of Welfare. In the 1970s his work also included several stints as a filmmaker, working on videos for social causes with the Developmental Center for Autistic Children in Philadelphia and the Philadelphia Child Guidance Clinic.

Alessandro Duranti, professor of anthropology and former dean of the Division of Social Sciences in the UCLA College, described Goodwin as a philosopher-social scientist whose sense of wonder allowed him to observe phenomena that others might miss.

“As I think back about all of the occasions where I heard Chuck give talks, teach and express his opinion on other people’s work, there are two qualities that immediately come to mind: his originality as a thinker and his intellectual generosity especially toward students and younger colleagues,” Duranti said. “Chuck is one of the most original scholars I ever met in my career and one of the most generous teachers and mentors.”

He is survived by his wife, Marjorie Harness Goodwin; brother Robert Goodwin; and sisters Patricia Wrightsman and Anita Goodwin.

Friends, family and colleagues gathered for a celebration of Goodwin’s life during which they shared some of Goodwin’s final ruminations printed in the program:

I envision when my life finally fades out
It is fading out in a scene like this
That’s filled with the life of others with all sorts of generations
And that seems to be the world that we inhabit
Rather than a private world of pain and death
A world that is sustained through the richness of other people
And their care, concern, intellectual stimulation
And it’s the most wonderful thing.