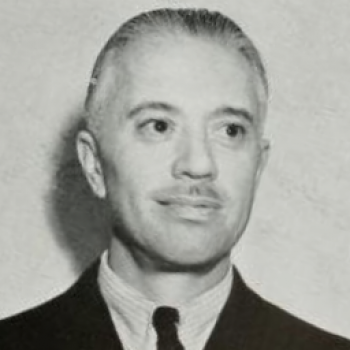 Infatuated with the city and people of Los Angeles, Murray became a teacher of public speaking and debate coach at Fairfax High School in Los Angeles for one year. Dr. Murray then joined the faculty of the University of California at Los Angeles in 1929 as a teacher of Public Speaking and Argumentation and as an Assistant Director of Forensics. Dr. Murray would go on to become one of the most senior staff at UCLA, holding his positions for 36 years.

During this period, Professor Murray was highly regarded for his devoted service to the Forensics program on this campus. Just as impressive are the contributions he made to the lives of the hundreds of students who enrolled in his famed speech performance courses. Being a noteworthy rhetorician, he taught countless students the practical art of debating and effective public speaking. He was the epitome of a dedicated teacher, and happily spent time with his students trying to make their learning experience as comfortable as possible – a trait, which was repaid with the undying devotion of all his students. Under his leadership, UCLA took second place in the Western Debate Conference and won first laurels for panel discussion.

In addition to his service to the UCLA campus, James Murray continuously served as a guest critic and judge for speaking contests for service organizations throughout the community, served as the talented bass soloist in many Hollywood and Los Angeles churches, and even found time to write. His most recent book being, The Speaker and His Audience, which was published shortly before his death.

Dr. Jimmy Murray possessed a ready and keen sense of humor, which he often used at the expense of himself. He passed away on September 24, 1966. Dr. Murray was highly regarded by his colleagues as a fine gentleman with a real gift for teaching, and served an invaluable part in UCLA Debate Union history.