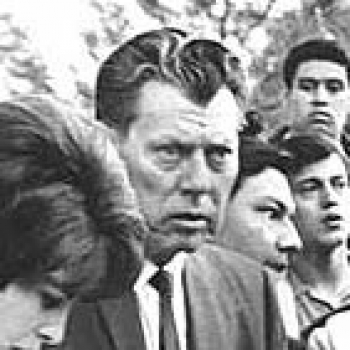 Whether in a classroom, a cockpit, at a bridge table or in the middle of a political campaign, Ralph Richardson was a born teacher. He had so much knowledge and enthusiasm in his soul that it just naturally spilled out, even if the person with whom he was sharing was unaware that he was Ralph’s student. Everyone who knew or loved Ralph was his student and was the better for it.

Born on a family farm in Morehead, Kansas in 1918, Richardson graduated with a B.A. from the University of Kansas and preceded to serve in the Navy as a pilot – flying was one of his true passions. After his service, Richardson obtained a PhD from Northwestern, studying the life and career of Jefferson Davis. Dr. Ralph Richardson then came to UCLA in 1948 as a professor in the Department of Communication Studies and served as one of UCLA’s most valued professors for over 38 years.

Through his research on Davis, Richardson began his exploration of the works and influence of Abraham Lincoln. Richardson admired Lincoln for both his political prowess and speaking skills, which inspired his curriculum as a professor and his own political career.

In 1957, Richardson was elected to a seat on the Los Angeles Board of Education, where he served three terms. As a board member, Dr. Richardson served as a champion for both teachers and students, and oversaw the difficult desegregation efforts; he felt the needs of the community colleges were lost in the much larger K-12 systems.

More notably, Ralph Richardson spearheaded the movement to integrate West Los Angeles College. After the community colleges were separated from the Board of Education, Richardson was elected to the newly created Board of Trustees and served for another eight years.

In addition to his success as a politician, Richardson’s seminar class on Lincoln’s speeches became one of UCLA’s most popular classes. And although Richardson’s tenure as director of forensics was short, he sacrificed much of his time for the UCLA Speech and Debate Team and had a deep appreciation for the work required to achieve excellence in debate.

After his retirement from UCLA, he remained close with many of his former students, often receiving postcards from those able to visit Washington D.C. and other places of close relations to President Lincoln, serving as reminders of his most esteemed class. Richardson passed away on January 4, 2002, but will always be admired by his colleagues and the students at UCLA for his brilliance as a principled politician, a speech coach, a professor of communication studies, and a teacher to all.