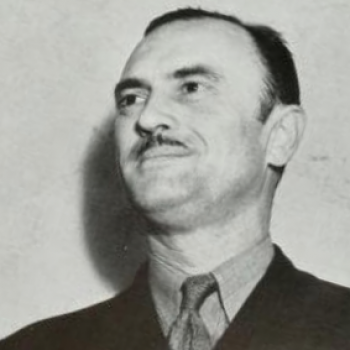 Wesley Lewis was perhaps the most prominent member of the UCLA staff involved with the UCLA Debate Union. Born in Galion, Ohio in 1898, Lewis grew up with a family who held education in highest esteem, and he attended the University of Chicago in 1919. He would go on to receive both a B.S. and a PhD from this renowned institution.

When Dr. Wesley Lewis arrived at UCLA, in 1928, as an Assistant Professor, speech and debate was only a small activity within the Department of English. Lewis, however, assisted Professor Charles Marsh in establishing the foundations for the UCLA speech and debate team. Lewis was instrumental in recruiting professionally distinguished individuals, and faculty, which gave speech and debate enough clout to stand on its own as a distinct Speech Department, in 1963 – the dream he held for 35 years.

Dr. Lewis emphasized the importance of the historical, theoretical and genealogical aspects of the forensics topics and allowed the students to obtain a deeper understanding of the issues by establishing many courses regarding these subjects. In addition to his teaching contributions, he spent a great deal of his time coaching his students in competitive speech activities. On the local, state, and national levels, Lewis was able to coach his participants to the top ranks of the competition. Many of his former students and debaters are now prominent figures throughout the state and the nation.

Unlike many professors, whose work gradually diminishes nearing retirement, the last ten years of Dr. Lewis’ life were perhaps his most productive. After being identified as the man most capable of organizing a public speaking and voice laboratory program, the Departments of Engineering and Business Administration recruited Dr. Lewis. His program drew in professionals from around the nation and helped to dramatically build the esteem of the University. One semester before his death, he saw the realization of his dream, when the UCLA created the Department of Speech.

Professor Lewis is remembered for being a husband, father of two daughters, for having the warm admiration of his students, for being a compassionate man to his competitive debaters, and for contributing immeasurably to the Department of Speech and forensics. The death of Professor Lewis, on September 20, 1963, was a great loss to many at the University and his memory has been cherished and remembered respectfully. The richness of the life of Wesley Lewis, as well as his work and contributions, will not soon be forgotten.