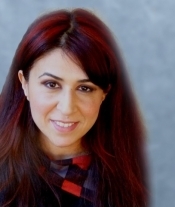 I have graduate degrees from Hamburg University in Germany and Cambridge University in England, where I was one of the first William H. Gates Scholars. Before completing high school in Germany, I grew up during the Soviet war in Afghanistan, which gave me a lifelong concern for understanding conflict.  Through being educated in three countries and four languages, I developed my interests in intercultural communication. After graduating from Cambridge, I worked for the British Council, overseeing international media projects involving journalists, TV presenters and writers from across the Middle East and Asia. I later joined the BBC, where I worked for several years analyzing the Afghan, Iranian and European media. I am a trained linguist and have translated professionally from Persian, German and Spanish and also understand Pashto, French and some other languages. My book, Afghan Rumor Bazaar: Secret Sub-cultures, Hidden Worlds and the Everyday Life of the Absurd is a study of new media and youth cultures of contemporary Afghanistan. Professor Brian Glyn Williams (University of Massachusetts, Dartmouth) described it as “invaluable and groundbreaking” in a review in Central Asian Survey. I have also translated the autobiography of the Iranian journalist Houshang Asadi and edited several books on the representation of minorities; literature and transnationalism; and Middle Eastern youth journalism. I am a regular writer for The Guardian, Huffington Post and have recently begun writing for Al-Jazeera America. I am currently writing a book on women’s education between Asia and the West.

Nushin Arbabzadah (ed. and trans.), Kamran Mirhazar’s The Cry of a Mare about to Become a Butterfly and Other Poems (Netherlands: Poetry International, 2010).

Nushin Arbabzadah (ed.), From Outside In: Refugees and British Society (London: Arcadia Books, 2007).

Nushin Arbabzadah (ed.), No Ordinary Life: Being Young in the Worlds of Islam (London: The British Council, 2007).